This is a first.  The recipe I’m about to show you is something I came up with, inspired by a dozen other recipes and bakers, drawing upon my successes in trying their recipes and what I’ve learned from reading their (far superior) blogs.  I’m super excited to bring you this recipe, so let’s get to it! 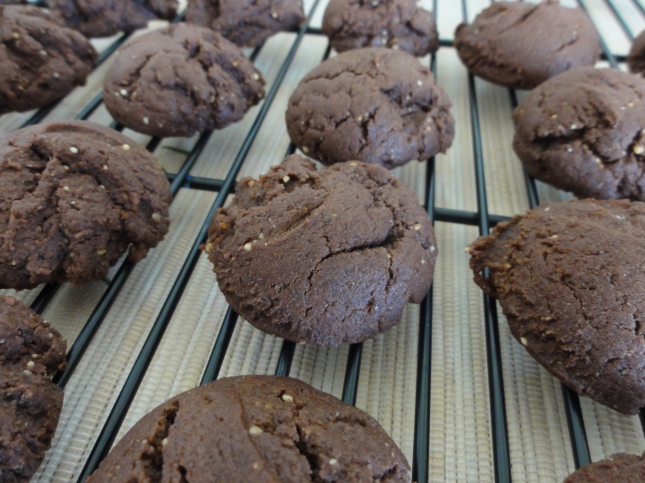 END_OF_DOCUMENT_TOKEN_TO_BE_REPLACED

Posted by Daniel Gow on March 30, 2016 in Baking, Uncategorized

Last November I featured the recipe for Orange Spice Cookies from “The Allergy-Free Cook Bakes Cakes and Cookies“, by Laurie Sadowski, which still holds the reigning position in my recipe collection for my favorite vegan recipe.  Recently I tried another of her recipes, intrigued by the concept of using tahini, a sesame paste, as the substitute for eggs and butter.  Tahini on its own is remarkably strong stuff, but when baked with a significant quantity of maple syrup the end result is delightfully flavorful with a noticeable, but not unpleasant, kick from the tahini complemented well by the rich sweetness of the maple syrup.  After faithfully following Laurie’s recipe for the first batch that I made, I decided to test out a theory of mine:

There is no recipe that cannot be improved by the addition of cocoa powder.

END_OF_DOCUMENT_TOKEN_TO_BE_REPLACED

A friend of mine passed along this recipe for Samoa Oreo Cookies from Chef in Training, which as-is look amazing and the trick of using a boxed cake mix simplifies making the cookies.  After thinking about how I’d want to go about making these, the cookies reminded me of the Chocolate Brownie Cookies I made for the inaugural recipe on this website.  My first attempt at these involved the Chocolate Brownie Cookies but without the pecans, and with a buttercream frosting made with a 1/2 cup of butterscotch ice cream topping and about a cup of toasted coconut flakes smooshed into the frosting in each cookie.  This was the result, and they were fairly amazing:

In the process of eating these while sharing them with some friends, I decided that I definitely needed to bake these again but I wanted to try a maple frosting instead.  The result was just slightly more amazing than the first attempt:

END_OF_DOCUMENT_TOKEN_TO_BE_REPLACED

As I’m typing this there is snow on the ground outside, but when I baked these cookies last week the weather still vaguely resembled autumn and that was my inspiration for choosing them.  The recipe is courtesy of Laurie Sadowski and her recipe book “The Allergy-Free Cook Bakes Cakes and Cookies“.  I picked up her book at “Canada’s Gluten-Free Market”, an expo on all things gluten-free back in June that was a riot of gluten-free-ness and a good deal of fun.

Thanks to Laurie’s allergy-free efforts the recipe didn’t call for any modifications on my part.  These cookies are not only gluten-free but dairy-free, nut-free, and contain no refined sugar.  This chalks them up alongside the Vegan Maple Nanaimo Bars for allergy-friendliness (though my current iteration of the nanaimo bars includes nuts) and I’m also happy to report that they’re right up there in the “delicious” and “don’t last very long once offered to people” categories as well.

END_OF_DOCUMENT_TOKEN_TO_BE_REPLACED

Back in April I attempted to make nanaimo bars by taking Leanne’s recipe from Healthful Pursuit and changing a significant number of the ingredients.  Perhaps not surprisingly that didn’t work out so well and I’ve been meaning to try again but stay closer to the original recipe.  I’m happy to report that my second attempt worked much better!

END_OF_DOCUMENT_TOKEN_TO_BE_REPLACED

My thanks this week go to Laura’s Sweet Spot for this recipe.  I had an inexplicable hankering the other day for maple walnut cookies and so I asked the internet for help and came across a number of options.  Some were “maple spice” cookies, others involved icing, but her recipe is straight-forward and simple and that’s what I was looking for.  I was also completely taken by her statement that flavored pancake syrup is insulting to the maple trees – I couldn’t agree more!

END_OF_DOCUMENT_TOKEN_TO_BE_REPLACED

My thanks go to The Chic Life for this recipe for coconut macaroons, which I used as a basis to get the proportions right.  I was searching for a macaroon recipe for which the ingredients were a close match to the “Cocoroons” brand of macaroons, which are a little hard to come by but are simply amazing.  Most of the recipes I found involved egg whites, which Cocoroons don’t have on account of being raw, vegan, and gluten-free all at the same time.  The Chic Life’s recipe was an almost perfect match though, and I only tweaked the recipe slightly by changing the sweeteners.