For September’s first recipe I tried something a little different to my usual buttery drop cookies with a recipe from “The Cook’s Encyclopedia of Cookies” by Hilaire Walden.  These amaretti are almond flour cookies, thus implicitly gluten-free, and contain no butter.  By weight they are primarily made up of almond flour and sugar so they taste pretty good, too.  The ambitious part for me was beating egg whites for the base, generally one of the more delicate tasks in baking, but I’m happy to report that it worked out just fine and I wound up with some delightful cookies.

I wasn’t at all certain what the final texture of the cookies would be, having not had any experience baking egg-white-based cookies before.  The end result is a chewy cookie that tastes and feels light instead of the rich, heaviness of a butter cookie (not that there’s anything wrong with the latter).  This is complemented particularly well with a strong almond flavor and a subtle hint of chocolate from the cocoa powder.  I had wondered if they’d be more of a crunchy sugar cookie, but instead got a chewy sugar cookie, and I’m not at all disappointed by this outcome.  One other nice thing about this recipe is that they’re fairly quick to throw together.  You also only get a couple dozen at most, which is a little less overwhelming than some other cookies that I’ve made and sometimes that’s nice, too.

One last note up here; two of the ingredients for this recipe, superfine sugar and cream of tartar, were a little tricky to come by.  See the “Thoughts” section below for how that worked out for me.

Start by mixing together your flour and half of the superfine sugar.  Make sure you only use half!  The other half will get added to the egg whites to make them shiny.

I don’t happen to have a sifter so to “sift in” the cocoa powder and confectioner’s sugar I just added half of their respective quantities, whisked until well combined, and then repeated. 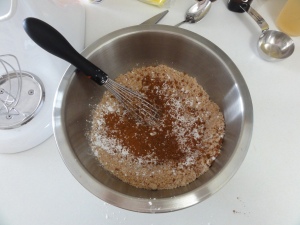 Once all of the cocoa powder and confectioner’s sugar are in you can keep whisking until it all looks uniform. 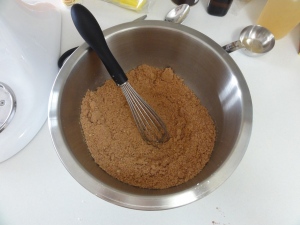 I think this is the first time I’ve had my Kitchenaid on its highest setting, which is a little scary to watch.

To the best of my knowledge this is what is generally meant by “forms stiff peaks” in that the fluffy egg white mixture holds its shape. 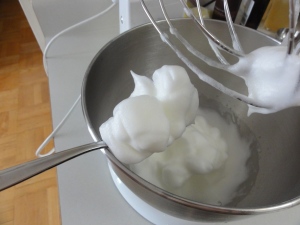 Glossy, stiff peaks might be a little hard to get across in a photograph but hopefully you can see that after beating in the 1/4 cup of superfine sugar the egg whites do appear smoother. 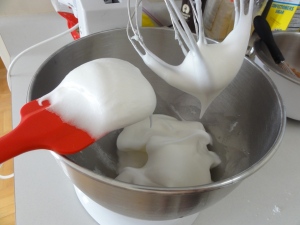 The almond extract won’t change how the egg whites look so just beat it in for 20-30 seconds to make sure that it’s thoroughly blended in. 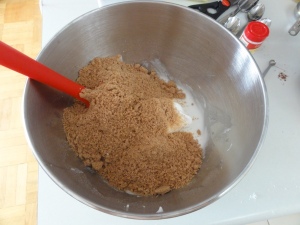 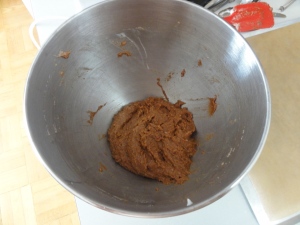 In addition to this being my first egg white recipe, this is also my first decorated cookie recipe!

The cookies hold their shape very well while baking so you don’t have to worry about their spreading out.  When the cookies are done the outsides will be firm and there will be just a little springiness in the cookie when poked with a finger.

Posted by Daniel Gow on September 2, 2013 in Baking